Between January 24-28, eight women’s and 20 men’s team from across the United States competed at the 2018 USA Curling Senior Nationals at the Duluth Curling Club in Minnesota. Team Wright began strong on Thursday with a 7-1 win against John Kram’s (Bismarck, ND) rink and then a 10-0 win over Art Ruhononen’s (St. Paul, MN) rink the following morning. Wright’s rink took a turn when they were defeated 4-7 by Mark Olson’s (Milton, WI) rink on Friday evening. Following a 7-8 loss to Team Holt (Farmington, MN) on Saturday morning, the round robin competition concluded with a series of tiebreakers. Six men’s teams had secured their position in Sunday’s playoffs; however, with their 2-2 finish Team Wright would have to fight for their playoff spot. On Saturday afternoon, Wright beat John Kram’s rink with a score of 8-2. That evening Wright’s rink beat Darrin Holt’s rink with an 8-3 score.

With all tiebreaker games played, Wright continued to the quarterfinals on Sunday morning where the rink from Illinois won 4-3 against a previous champion, Paul Pustovar (Hibbing, MN). In the semifinals, Team Wright successfully secured their position in the event finals by defeating Phil Devore’s (Superior, WI) rink with a score 7-5. On Sunday evening, the finals commenced as Team Wright took on Mark Olson’s rink for the second time. With a back and forth game that resulted in a tie game by the sixth end, Wright’s final shot in the 7th end resulted in a gain of four points. With a final score of 7-3, Team Wright awarded the Olson rink their only loss in the competition. 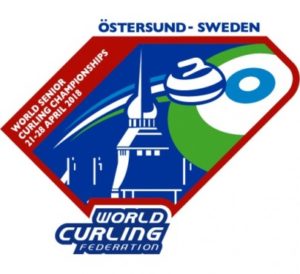 The World Senior National Championships began in 2002 and was established for athletes age 50 and older. Overall, the USA men’s team has won three world titles in the recent years (2015, 2010, 2002). An Illinois men’s team has represented the USA only once in 2014 when Jeff Wright led the team with two of his current team members (Russ Armstrong and Russ Brown). This year, the Illinois team will participate with countries such as Finland, Russia, Ireland, Croatia, and Ireland in the World Senior Championships from April 21-28.